JBL Charge is a portable wireless Bluetooth speaker made by Harman which have been one of the bestselling Bluetooth speakers ever since launch, with high customer rating owing to its combined low price and pleasant sound reproduction. The color options in addition to the blue/white seen here are black, grey, silver, blue, and green.

The MSRP launch price is $179, and this model is available from Amazon and Microsoft.
http://www.amazon.com/JBL-Portable-Wireless-Bluetooth-Speaker/

The price is an important factor here, since the sound quality of the $149 JBL Charger is the same as in more expensive $300 speakers, and I think that’s the reason why people love this speaker too. They probably feel that they get good value for money here.

JBL Charge have a 10 watt effect (2 x 5W), and a 12 hour battery life, and the 6000 mAh battery can even be used as power bank to charge other devices via the USB port. The design is very streamlined and effective, with a three level battery indicator on the top, along with a volume rocker, and an on/off button that also indicates the pairing status. 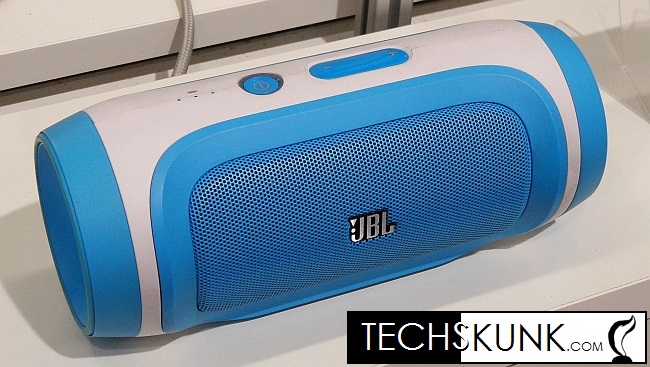 You can connect the JBL Charger both via Bluetooth or through the 3.5 mm audio jack. To pair through Buetooth you simply hold down the on button until it has been paired with the smartphone, tablet, or computer. It’s the same similar process to that of most Bluetooth speakers.

JBL Charge have a sound quality that’s a little better than the Flip speaker, with higher bass when you want (but not too much either) with these two speakers sitting on the sides of the Bluetooth speaker. At the highest volume the treble can get a little distorted if you play more advanced music with just those kind of effects. The frequency response of JBL Charger is 150Hz – 20kHz though, and the vocals sound clear and as they should.

Best of all is the neutrality of the sound. This means that you can play all sorts of music and it will generally always sound like it should and as you expect it to, without too much bass or too muffled vocals. A tip if you want a to alternate the effect of the JBL Charger, is to place the speaker vertically instead of horizontally, with one bass speaker pointing downwards on a table.

So the neutrality of the sound and the relatively low price is what makes the JBL Charge such a popular Bluetooth speaker. If that’s what you’re looking for, this portable speaker is recommended.